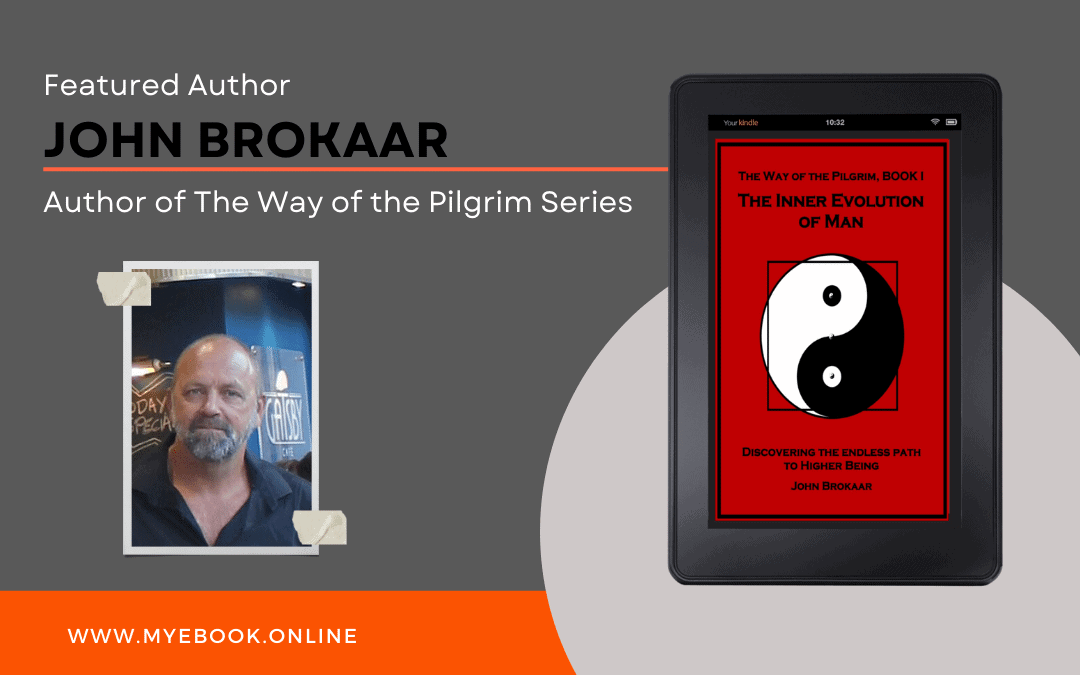 Not many know but some of the first books our business helped publish were the metaphysical titles written by our very first author Jimmy Henderson, my father. When connecting with the newly-published author John Brokaar over series of 3 books “The Way of the Pilgrim” I was fondly reminded again of exactly why the business was started all those years ago. Written from a place of deep awareness and self-exploration, this series of books promises to be an insightful read.

The Way of the Pilgrim is a series of three books, individually named

These books may likely not be an easy read for many as they cover a large variety of topics which aim to penetrate the deep, delicate and often sacred parts of our personal reality, and that of our perceived world. Their content challenge not just the reality of one’s identification, but also that of the various systems of belief we base our respective identification on, including the belief that we are able control what we do in our physical routines, or that which shapes our thoughts and opinions, such as our likes and dislikes. They illuminate the conceptual mechanism of duality or opposites, as observed in both the individual and the collective life, and how the co-existence of our finite reality within an infinite one, in many a way makes much of what we are, theoretically illusory! This kind of thinking is not always popular, but then the point of these books was not to entertain, and rather to activate within the sincere individual self, a pattern of observed thought that may be the only thing we can ‘own’.

As such, the BLURB of the series probably describe the books themselves best:

Humanity looks at the ‘world’ it perceives, which tells it what to do, think, say, eat, vote, or buy and what to teach its children on right, wrong and true. Its gods are value denominated, or in the form of a leader, idol, priest, or proclaimed expert, and whilst it knows their words are scripted, all still listen carefully – in order to formulate and own an opinion on them. What few realize, is that nobody actually cares about what anyone believes, as all that matters was that the process of redirecting one’s focused attention was attained.

Surrounded by the plethora of ‘noise’, few know of the actual forces at play; the ones that cause the illusion of conflict, war, pandemic, famine and even natural disasters. Even fewer understand the manner in which all these can possibly be connected. Consequently, these do not understand how their ‘gods’ would lie and deceive on such grotesque levels and degrees, and who in turn have no actual idea of the lives of the contemporary masses. From their perspective, these represent mere grains of sand, upon which they walk, and yet each of their steps are subject to the same conditioned nature as that which governs man.

Of course, every man and woman of a mature age, co-creates these ‘gods’ and their subjected masses, and thus by proxy, each of these pains and catastrophes. This cannot ever be resolved on a collective level; the answer lies within every one – individually – who must re-learn the ‘how’ and ‘why’ in life.

The Way of the Pilgrim contemplates the observation that all we think, say, do, and like is mechanical, stimulus reactive and thus, programmable, and even if one were able to rise above these one- and two-dimensional realities, and discover the three-dimensional reason and logic, it seems one will still be stuck as a cog in a greater mechanism.

– All teachings directly or indirectly hint at this.

The purpose of these writings is to indicate that this ‘mechanism’ is intelligent, conscious and not random

– on the contrary, it has a very specific purpose –

The full awakening and consequent realization of every man and woman, who is sincere and willing to undertake the work, and consequently emerge as part of the Greater Being and the attainment of their very birthright.

The Way of the Pilgrim series offers an insight of what an unawakened humanity has missed, ignored or forgotten, and as always, the journey must begin at home, with the Self, and with Book I, The Inner Evolution of Man. In Book II, The Outer World of Man, it observes the world that so dominates humanity, and finally, the magic emerges, when the two are brought together harmoniously in Book III, Merging the Inner & Outer World of Man.

How long did it take for you to finish the final draft of your book?

It was the intention to publish all three books simultaneously. Thus, following a process that stretched over about 12 years – of which the last 2 or 3 were spend on writing the books pretty much full time – it then took about another 12 months to draft, edit, review, re-draft, re-edit and publish.

Why did you write – was it for love or money, fame, or to emphasise a point?

The writings of the first few years were not intended for publication; they were more like a record of research, with details and observations. As the volume accumulated however it needed to be sorted into categories and chapters, which then gradually evolved into book form – and then, attaining a life of its own, one book became three. It then seemed natural that one should just put it out there, and see if there is an interest in this sort of thing.

Money or fame are definitely not the motivating factors as these books are unlikely to become popular best sellers. There wasn’t any single point as such either, but exploring the collage of entwining and integral philosophical, spiritual, religious, psychological, sociological, geopolitical, economical, historical, mythological and symbolical detail, such as that The Way of the Pilgrim encompasses, was an incredibly fascinating journey.

What makes this book different from others on the shelf?

This is complex to answer as there are so many other books ‘on the shelf’. Perhaps the books in The Way of the Pilgrim series differ from much such writings where they do not promote any particular form, discipline, technique, method or miracle, and yet the reader may find a portal, path or purpose in them all.

What was the hardest part of the writing journey for you?

It is always complex to undertake and maintain a lengthy journey – especially when one does not know how long it will be, the consequent outcome of the project as a whole, its cost, or its eventual effects on oneself – physically, psychologically, socially, and a few others.

Your favourite place to write?

There is no actual ‘place’ as such. It could be over a cup of coffee or something stronger, with a notebook in an interesting café, behind a laptop at home, or in a comfortable chair, even from the passenger-seat in a car or other. It is really that ‘space’ one seeks, where one can find the flow in oneself. Even the quiet early morning-hours, or at times in the middle of the night, following a period of focused and deep contemplation, or after a little meditation.

What kept you motivated to write during the times you felt stuck?

To finish what was started is always important, but so was the cost of living – finding and maintaining the right balance ensured a sustained motivation.

Have you written any other books?

Yes, but not (yet) published.